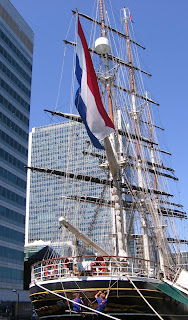 Any excuse for a photo of a sailing-ship, in this case the Stad Amsterdam. This is just one of the new arrivals at Canary Wharf.

There have often been one or two expensive-looking private yachts moored up at South Dock, but those have been moved away into what looks like a less convenient and attractive spot. 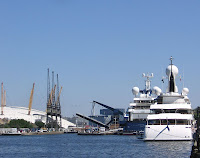 Instead, South Dock now houses two substantial ships - the one nearest the camera belongs to the owner of Westfield, the Australian supermarket chain, whose new Stratford shopping centre is the major commercial investment in the regeneration of the Olympic Park area (so that would explain any number of red carpet receptions): but what, you might ask, of the big blue behemoth behind?

That, it seems, is owned by the co-founder of Microsoft, and is called (not inappropriately, though I doubt if he's aware of the irony) Octopus. So now you know where your money goes: it's so big (with not just one launch, but a swish cabin cruiser - just visible at the bottom left of the photo below - and a fair-sized tender, presumably for the nautical Microserfs) and takes up so much space that one wonders it isn't called Octopus 8.0. No word yet on how often it crashes. 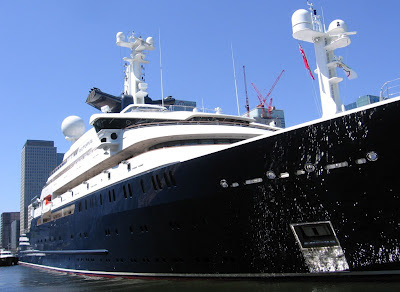