An old flame drops in

The stories associated with the Olympics haven't done much to soften most Londoners' habitual weary cynicism, but the hoopla around the torch relay, which seems to have been working elsewhere in the country, might just have begun to warm up the mood with the weather. The TV news coverage of its arrival in London last night, abseiled into the Tower of London, showed Our Beloved MayorTM sporting an actual haircut for the occasion (though I suppose it might just have been the effect of whatever was trimming the hedge through which he normally looks as though he's been dragged backwards). Today it (the torch, not the haircut - do keep up) was wending its way through various parts of East London, including the Mile End Road, a mere bus ride away. 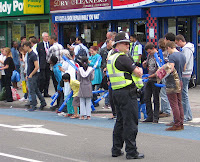 With half an hour to go before its likely passage past the tube station, there was hardly a crowd gathering, but certainly more than would usually suggest old-fashioned "loitering with intent". But it wasn't long before the road was lined three or more deep, the whistles that seem an unavoidable mark of public celebration these days, and the blow-up advertising batons being given out by sponsors, were making a noticeable din, and the traffic was stopped. 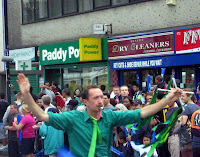 Eventually (and, if anything, ahead of schedule), a convoy of cars and buses appeared, then sponsors' floats (Samsung advertising rather than chucking out free samples of their latest smartphone - this is the Olympics, you know, not the Tour de France). What looked like a horsebox halted outside the tube station, and there was a pause while cameramen clustered round it and everyone strained to see what was happening. Perhaps the torch itself was changing hands to a new bearer, because in a matter of seconds, one last van led the torch, bearer and accompanying security team as they almost sprinted past, and vanished away down towards Stepney.

You might just catch a glimpse at the end: