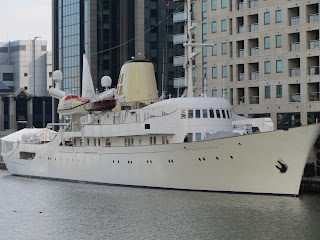 We had as much excitement on the rather ramshackle converted lifeboat that served my parents as a cabin cruiser on the Thames for a year or two. The sight and sound of celebrities clashing egos on whale-foreskin-covered bar-stools would have been as nothing compared to the tale of the Day Dad Dropped The Elsan.
Posted by Autolycus at 09:00