A weekend in Amsterdam (1) If postings have been a bit sparse recently, one of the reasons why has been a burst of early spring-cleaning, to get the flat ready for a weekend exchange with someone in Amsterdam. There's nothing like trying to see your own space with someone else's eyes for spotting scuff-marks and wonky cupboard doors that you've taken for granted for too long: and sorting all that out needed an extended plan of campaign. 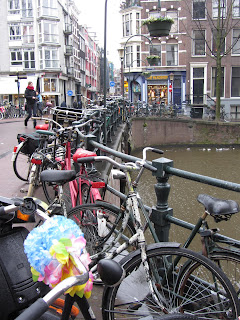 I've been to Amsterdam often enough not to be rushing around the regular sights; this time I was noticing more interesting details.

Take the cycle culture, for example. Bikes are used everywhere, and accumulate in drifts wherever there's a railing to chain one to (you've only to look at the 2500 place - count 'em - multistorey bike park at Central Station to imagine what Amsterdam would be like if cars were used as widely).

But these are mostly rather different bikes from what we see in this country or elsewhere. It's easy to spot the specialised work-bikes, with a handy box (at the front, rather than behind) for small children (once they're past being perched on a extra seat in front or behind the rider) or quite substantial freight; but it also dawns on the observer that very few are anything like racing bikes or mountain bikes (nor does anyone attempt to dress up in special cycling gear, let alone a helmet). On closer inspection, "city bikes" or "grandma bikes" turn out often to have only the one gear (it may be a flat country, but there are some impressive hump-back bridges), which makes it easier to instal a complete enclosure around the chain (that must save on the cleaning - I'd want one, only it wouldn't fit on my bike).

But, lest you think the cyclists have it all their own way in Amsterdam, here's a sign of the times, just outside where I was staying: a recharging point for electric cars.
Posted by Autolycus at 15:27