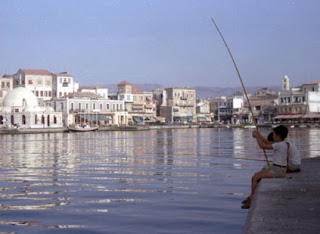 One of my big retirement projects is to digitise all the old photos piled up in boxes in my cupboard of clutter and mysteries. Seizing the first box to hand the other day, I found myself ploughing through assorted negatives from the 1960s onwards.

Although there are as many individual images as I'd imagined, it's always surprising how few are really worth looking at again. 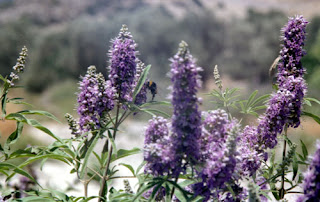 There have been some finds of moments and people I'd completely forgotten about; and scanning from the original negatives has, after some digital jiggery-pokery, brought to life images that, in print, have faded (like these of Crete in the mid-1970s), or brought out usable detail out of those that looked too dark or badly-composed. But there's been a sight too much "Who the heck is this, and what was the point of taking that?".

Each new packet reminds me of the limitations of pre-digital photography: having to make your own judgement about setting time and aperture for the light and film-speed - and then having to wait for days, or even weeks, to know whether you'd got it right, which (combined with the cost) meant taking fewer photos in a week on holiday than in a few hours today. It also meant filling in with often pointless test exposures at the start of the film as you wound it securely on, or to fill in the odd handful left on the end of the roll (unless you'd tried sneaking in "just one more" and found only half of your best shot because it was right at the end already). 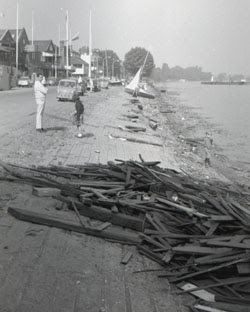 Most unexpected is the incidental recognition of changes in the otherwise unremarkable sights that don't exist any more. Here are pictures from the 1960s, of the Thames riverside where I used to live, about as far west of central London as I now live to the east.

Driftwood washing up on each tide was a normal sight. These must have exceptional accumulations, with the piles built up outside the rowing clubs to be burnt off rather than risk them floating off on the next tide and damaging the boats (and my father wasn't too proud to collect driftwood on a home-made trolley for firewood at home from time to time). 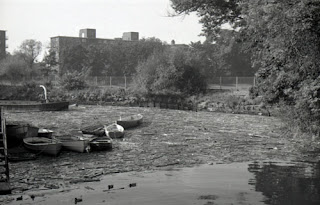 Nowadays, it's not only clean air laws that prevent all that from happening. The inlet in this picture is now cut off from the river's tides by subsequent flood prevention works, and incorporated into a local park. But it wasn't till I saw these images that I realised we never see driftwood like this any more, no doubt for the same reason that I'm able to live where I live now. With the docks moved down to nearer the coast and everything arriving in containers, and with the riverside warehouses and factories replaced by housing, broken-up crates and pallets and stray baulks of timber are no longer ending up in the river and washed right through London to the western suburbs.
Posted by Autolycus at 07:17