..just for a moment I could have sworn the radio presenter had announced a melancholic madrigal as "Weep, oh mine eyes, and see snot."

What we have here is a "mondegreen", allegedly as in the mishearing of the folk song line "And laid him on the green" as "And Lady Mondegreen", but they're hardly new. Gladly My Cross-Eyed Bear must be as old as the hymn itself; indeed they must have been around since the beginnings of language (in the early days, how did people distinguish one Ugh from another?).

I was once sure I'd heard Whitney Houston sing "Climb Every Woman", but we won't go there. And then there was the time my father was dozing by a cosy fire as the radio broadcast some sorry person's request for Frank Sinatra's dismal hymn to egoism: my father stirred and mumbled "Wassat? What's he on about? I did it sideways? Silly sod", and slipped back into the Land of Nod.
Posted by Autolycus at 07:20 No comments:

Still some daylight in the sky as I got home from work today - indeed a sunset very like the last time I could say that (28 October, for what it's worth), which saves me taking more or less the same photo twice: 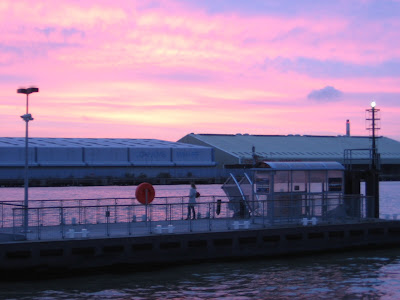 Posted by Autolycus at 18:30 No comments:

Time once again for the annual short-list of contenders for the Oddest Book Title of the Year. I may be blasé, but is this year's list a bit weaker than in the past?

I've rather assumed that the oddity rests in the title's ability to suggest something much more bizarre/surreal/perverse than the actual content; but for most of this year's list, it's not too difficult to work out the authors' mundane literal or metaphorical intentions. The only contender, in my book (geddit?) is - and readers of a nervous disposition should look away now -

Full details of runners and riders here.
Posted by Autolycus at 09:48 No comments:

Word to the wise

On the tube this morning, our driver announced a new variation in the tide of official blether about things we already know or don't need to know.

As ever, it was à propos of nothing in particular, but at least he had the cautious honesty to say "All London Underground lines are claiming a good service".

Just as well: by the time I got off, one of the other lines was already having trouble.
Posted by Autolycus at 09:31 No comments: Between the Limehouse Cut and the main road, a long stretch of buildings, with a used tyre dump at one end, has been empty, and looking increasingly derelict for years, though a sign proclaims it's been "acquired" - perhaps a sign of more shiny apartments with "canalside views" to come. At the other end of the row, some leases seem to be falling in, and businesses are changing hands. One small building in this row, with a fanciful Victorian attempt at an olde-worlde bay window, used to be occupied by a funeral directors, clinging on like - well, like grim death; but suddenly, its boarded up windows were covered with fly-posters advertising, not just the usual club nights and aspiring rock acts, but (for a day or two only - someone's vigilant) "Attractive Escorts".
Posted by Autolycus at 18:48 No comments:

Can Spring be far behind?

The west winds over the last few days have certainly lived up to Shelley's poem - it's hard to imagine the winter snows now.

In Limehouse, the snowdrops and crocuses are once again carpeting St Anne's churchyard and the little park beside the canal, and the first ornamental tree blossom is livening up an otherwise dull street: To go with the season, here's Greig's Spring (with someone else's pictures of much more dramatic Norwegian scenery):

Posted by Autolycus at 17:41 No comments:

.. for the emotionally underprivileged:

Posted by Autolycus at 06:47 No comments:

I was sure I'd seen a bike impaled on a post along Cable St - some artistic prank, or a motorist's display of a victim, the way gamekeepers hang up the corpses of captured predators? But it was only a glimpse from the DLR, and when I looked for it to take a photo, it had gone.

However, these artistic efforts, on the disused viaduct ar Great Eastern St, are still going strong - Crunchy The Credit Crunch Monster, and what I can only suppose is someone's recipe for family life: 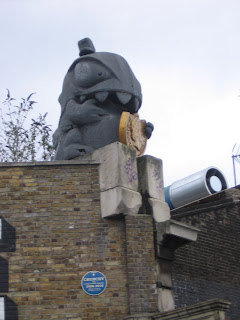 Posted by Autolycus at 18:32 No comments: