It seems that if a woman just puts her head into a John Lewis fridge, she comes out six months pregnant:

http://www.youtube.com/watch?v=zMtyOCoqHTk
Posted by Autolycus at 23:00 No comments:

What kind of tortured genius was it that programmed Facebook to suggest that you "friend" yourself - and then, if in a moment of devil-may-care whimsy you attempt to do so, to tell you

"You cannot connect with yourself."

Is this some profound observation on online social networking? Or have they been watching me all my life? I could get a complex, or something.
Posted by Autolycus at 18:03 No comments:

Labels: Internet
This Sunday morning brought the sound of pounding feet, shouts and cheers down our main road. Not election canvassers, but the London Marathon once again.

Once again, a kind neighbour with a prime balcony view of the oncoming crowds of runners had a viewing party. It all looked much the same as the last time I posted photos and videos of it. For a couple of hours, once the international elite and competitive club runners had passed, we had a parade of firemen, soldiers, cavemen, supermen, wonderwomen, cowboys, leprechauns, fairies, smurfs, Minnie Mice, Simpsons (and every other cartoon character you can imagine), an Avatar character, tigers, lions, a beer bottle or two, some whoopee cushions, a telephone, guide dogs, rhinos, a camel, a record-breaking caterpillar of 34 people, men in tutus, a rhino in a tutu, a giraffe with a 20ft neck, and extraordinary ordinary men and women of all ages, shapes, sizes and colours.

The Marathon's exhausting. It takes dedicated preparation and careful attention to the right kind of fortifying food.

For watching it, that is. So we had Spanish omelettes, sandwiches and sausage rolls, salads, cheese straws, sundry other savouries, and cake. And tea - lots of tea. And more cake.

My small contribution involved a few mini-pizzas (thanks to Walt's relay of a foolproof dough recipe - who'd have thought yeast would work better when it's kept in the fridge overnight?) and some chocolate macaroons (nice to eat, but there must be a better way than piping the mixture out of a bag - they looked like something that you mustn't leave lying in the street).

Eventually the last stragglers had passed, fortified in their turn by the slices of orange, chocolates and so on handed out by the spectators.

By the early evening, all the detritus of water bottles, orange peel, balloons and banners had disappeared : whether that has anything to do with the fact that our estate houses a local councillor and candidate for Parliament in this election - well, I couldn't say.
Posted by Autolycus at 09:53 No comments:

A bit of sun changes everything, doesn't it? My neighbours are out barbecueing and playing boules in force, and when I went up to Canary Wharf this afternoon, there was a flavour of the Punjab, as dancers celebrated Vaisakhi, the spring harvest/ New Year festival:

Posted by Autolycus at 17:15 No comments:

A tree with an identity crisis

Another sunny day without aeroplane noise, and today the sun had real warmth. Time for the annual pilgrimage to Columbia Road, and £15-worth of instant gardening to rescue my reputation from the sorry accumulation of brown bits in my window-boxes - quite a few of which are showing signs of new growth despite my ungrateful neglect over the winter.

Among the crowd-pleasing entertainments today was this unusual hybrid..... Posted by Autolycus at 13:19 No comments:

No sign of volcanic ash here in London. The sky has been more or less cloudless all day - indicating, apparently, high pressure preventing all that volcanic ash from moving on at any speed, which in turn means that the skies have been quiet. No stream of jets lining up to process up the river past us into Heathrow, no smaller prop-jets and the like circling round into City Airport - and no helicopters either.

However, as if it weren't bad enough that the ice-cream vans and their jingles are now making their tinny appearance, this morning I saw what I had thought a forgotten breed - an election loudspeaker van. And not for one of the major contenders, either. This was for the English Democrats, a somewhat Poujadist outfit demanding a parliament for England, and a mishmash of various populist eyecatchers (if UKIP is the party for Poujadists who don't care for foreigners, the English Democrats is the party for Poujadists who'd rather not notice them). What's more it wasn't hired for the occasion, nor was it an ordinary car with the passenger leaning out of the window with a handheld megaphone. This was all painted up in party colours, and a website address for the local party organisation (so, apparently not a van that's on loan around the country). One wonders where the money comes from, given that they'll almost certainly lose their deposit.

For this constituency, once considered safely working-class Labour, with just the occasional protest vote for the extreme right, is now considered highly marginal.

The demographic changes around here (that is, lots and lots of expensive rabbit hutches for bankers and City workers) have fuelled an upsurge of support for the Tories, who now hold the local council seats for this end of the constituency. The Liberal Democrats, who for a time held the local council, were strong in the Borough's other constituency, but not here, although they're putting up one of the party's stronger campaigners.

The Tories' hopes have been encouraged by the prospect of Labour losing votes to the egregious George Galloway and his rum collection of perpetual oppositionists, who for some reason have decided to move on from the neighbouring constituency, for which he was elected (though you wouldn't know it) last time, and devote their attentions to us.

And as if that weren't enough reason for this to be one of the constituencies to look out for, we're also to be asked to vote on whether we should have a directly-elected executive mayor for the borough.

But for all the hoopla, and the apparent sudden opening up of the national campaign after the response to the first leaders' debate on TV, there really only seems to be one option for my vote, here, since I don't want Galloway or a Tory government.
Posted by Autolycus at 16:43 No comments:

Barely a month since the first signs of spring flowers shivered their way into view - and today I saw the first wisteria - and the first dropped ice-cream - of the year.
Posted by Autolycus at 19:52 No comments:

I would have posted these earlier, but for a senior moment while packing after my Easter weekend away. Nothing like a picture-postcard village in the spring, is there? 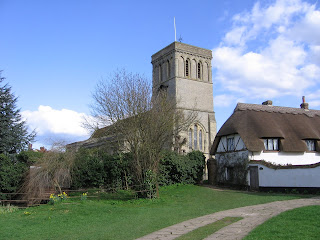 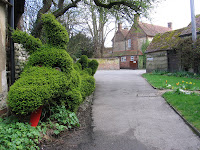 A little stroll with the children round the houses to work off some of the Easter eggs, and then a stop to see the dragon outside the house of an enterprising gardener (incidentally, this one's got a head at each end).

But the pub has a more traditional sort of guardian: 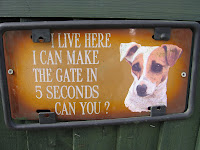