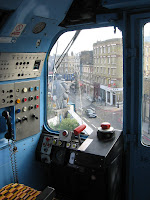 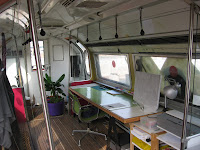 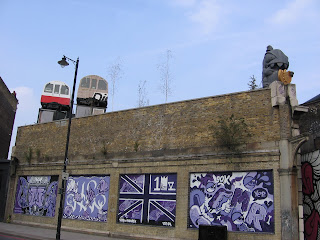 For once, trying to navigate through a herd of stampeding commuters at Waterloo offered something more exciting than another day at the office: I was going against the flow, for a train to Salisbury on a roundabout route to see Stonehenge.

A brisk walk to Salisbury bus station past some inventive gardening left me just enough time to savour the latest hot local news before the bus to Amesbury, the nearest town to Stonehenge. You can get a bus direct, but that just takes you to the car-park and the utilitarian sheds of the visitor centre: I was following a walking route that leads to Stonehenge through its context.

For the best part of a mile around the site, there are barrows (burial mounds) and supposedly ceremonial routes aligned around the stones. The route circles the edge of this gigantic piece of land art, offering distant glimpses of the stones as you climb up and down one set of barrows. Eventually it leads to the Cursus, an expanse of open land believed to have been an area for ceremonial processions, but on this morning used by a solitary runner and a small group of butterflies, one of whom obligingly rested on a fence post. The land is owned and kept open by the National Trust with clearly marked paths and handy noticeboards explaining the features of the landscape.

At the lowest point of the Cursus, the lie of the land seems to have been used to emphasise a sense of awe when you look up to the stones. The tourist trappings of the final approach now seem a temporary distraction, rather than defining the experience of the stones themselves.

It's the sheer scale, not only of the size of the stones and the effort to erect them, but also of the timescale that impresses. From the first wooden stakes to its final form, it seems to have taken as long as the timespan from the Romans to us; and it was finished and apparently abandoned almost as long before the Romans came.

All of its construction and use must have been in times when there was no writing, and no history but what was passed on by oral tradition, through a hundred generations - the longest chain of "Chinese whispers" one can imagine. The audio guide passes on some of the more entertaining myths as well as the best suppositions of archaeological investigation: but who knows what changes in concept and understanding, as well as use, of the site there might have been? There must, then as now, have been traditionalists and reformers, visionaries and functionaries, all leaving their mark on how the site was seen and used.

It escapes certainty: passing on, one last look back sees the site almost vanish into the landscape.

The return route leaves enough time for a quick exploration of Salisbury, where almost every corner seems to be stacked with baskets of flowers, and its Cathedral, which boasts a copy of Magna Carta, and a striking modern cruciform "infinity font". Here everything is defined and explained: would Stonehenge in its prime have had volunteer guides on hand and all the facilities to make the visitor feel welcome?
Posted by Autolycus at 09:27 No comments: Passing through Trafalgar Square over the weekend reminded me that Antony Gormley's One And Other project for the Fourth Plinth is still going strong.

24 hours a day, people get an hour to do more or less what they like. There have been people sitting and drawing the view, or photographing people photographing them, blowing bubbles, throwing paper planes, presenting some sort of performance art, promoting themselves and their interests in all sorts of ways. The occupant in this photo was protesting about puppy-farming (the photo ought to inspire something about turning a blind eye, but at the moment I can't quite work out what).

You can see what's going on at any time on the project's live video feed, and plenty of people have been posting clips on Youtube. Back in July, one astute swing dance tutor led a large group of his students from the plinth - great publicity for his class, and great fun to watch (sound is a bit variable on this, but clearer in this ground-level view):

Posted by Autolycus at 14:37 No comments:

Got a Quavers quandary, a pretzel poser, a Twiglets teaser, a flapjack flummox? To get rid of those Cheesy Wotsit worries, you obviously need the people whose van I saw the other day, emblazoned with the strange device "Always Delivering - retail snacking solutions".

It's not new, this habit of advertising not plain vanilla products or services, but "solutions", usually for the most mundane sorts of business. I seem to remember that Private Eye, when I still bothered with it, would occasionally offer some of the more egregious examples. No doubt there's a chemical company somewhere thinking itself mighty witty for offering "solutions solutions".

This is not quite the same as one of the banes of my former life as a middle manager - the return of the bigwigs from some conference or other, fired up with enthusiasm for the latest technological wizardry, the classic solution looking for a problem, which, of course, we would be expected to waste time identifying and "solving" (fortunately, it only mattered for a month or two until the next fad came along).

Nor is it quite the same sort of grade inflation by which, in estate agencies and other bucket shops, hair-gelled spotty herberts and over-mascara-ed peroxide blondes cease to be clerks and sales staff and become "consultants".

This is a bid for power. No more are you an everyday wholesaler among many, trailing round the corner shops like all the rest, waiting for them to tell you what they think they need. As a purveyor of "solutions" you can imply that you are like some new age therapist, the keeper of the munchies mysteries, the shaman of sugar, the high priest of Hula Hoops.

And as for us ordinary customers, the only "retail snacking solution" we need is quite simple: step away from the starch - eat an apple instead.
Posted by Autolycus at 12:32 No comments: Sad news this morning, of the death of Keith Waterhouse, best known for Billy Liar, who also wrote various other unjustly forgotten novels (Office Life, Thinks, Mrs Pooter's Diary), and newspaper column after newspaper column. In the last couple of decades he was writing for the Daily Mail (boo), but once upon a time, he was in the Daily Mirror and wrote its style guide (when it was still a newspaper). I have an old copy of some of his columns from those days - you could read it as a blog before its time, full of incidental items of nostalgia and comic rant.

Take this, for instance:

I have been listening to the wireless again. Not the radio. Not that transistorised plastic matchbox which sings and burps and prattles all day long like a drunken mynah bird, but a real wireless set.

It's a mahogany cabinet the size of a small wardrobe, its loudspeaker is framed by a fretwork fleur-de-lis, and it has strange stations on the dial like Daventry, Hilversum, Zagreb and Paris (Eiffel Tower).

A somewhat bohemian character of my acquaintance was plucked out of his garret in deepest Soho and hurried to the suburban bedside of his father, who was gravely ill.

As he tiptoed into the sick-room the old man opened his eyes, beckoned his son closer, uttered these immortal last words:
'When are you going to get your bleeding hair cut?'

Then he sank back into the pillows and quietly expired. It was, my friend reports, a most moving farewell.
Posted by Autolycus at 09:46 No comments: