Inertia has a lot to answer for, in my case, not that it (or I) can usually be bothered to. I won't tell you how many cookery books and magazine recipes I have yet to put into practice; and it's much the same with me and guidebooks to walks within a commuter's train ride out of central London. I have a nice collection, of which I suppose I have done three or four walks.

Having some days off, and no plans, I thought I really ought to make some use of my boots. Arriving at Penshurst station, the clouds were looking more than a bit funereal, but I was brought up in the spirit of "I brought you all this way to enjoy yourself, now get on with it", so off I set.

It's amazing how, within a few yards of the railway station and a village centre clogged with cars, a few yards into a field took me into such quiet that all I could hear was my own breathing. Even a model plane performing acrobatics some fields away made no sound. This is the gentle landscape of many a picture book, with undemanding ups and downs (nothing too strenuous for me) and docile cattle and sheep ignoring any passer-by, and even a fearsome-looking cockerel deciding I was no great threat to his plump and fluffy harem.

The route passed through Chiddingstone, a single street of Tudor cottages, the entire village now owned by the National Trust (and couldn't one tell: the backyard restaurant where I had a sandwich lunch had Radio 3 for its muzak), a church with a "vinegar bible" and plaques recording that one local family lost their elder son in the Boer War and the younger in the First World War. The village also has its "Chiding Stone", a rocky outcrop possibly - or possibly not - used as a place to reprimand local wrongdoers: someone had thrust a bouquet of flowers into the fence around it, like those impromptu shrines one sees at the site of road-accidents, so perhaps it has some special local significance still. Along the way there were plenty of signs of the seasons about to turn, although the wetness of the summer has left everything lushly green.

Eventually, the route arrives at Penshurst village, with more higgledy-piggledy Tudor houses round the church. Presumably it's miles from the station of the same name because the resident bigwigs didn't want the railway line too near their stately home: Penshurst Place.

This is a handsome old house, home to Sir Philip Sidney, one of the stars of Elizabeth I's court, but also much quoted as a moral example in the inherited Victorian books I grew up with. There's an impressive mediaeval hall and the usual complement of long gallery and ancestral portraits - many others in the family have been in court and public service over the generations, which is one reason why one of the gardens recreates the Union Flag in roses and lavender.

It is, of course, practically the law that a stately home sells cream teas, so that was some welcome extra fortification for the walk back to the station, past a reminder of more recent troubled times, and with one last, classic view - of a cricket match: Posted by Autolycus at 14:40 No comments:

But which way will it crumble? 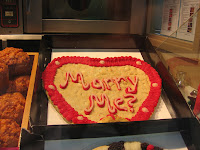 In among the chocolate chip, oatmeal and raisin, raspberry and white choc and other carbohydrate feasts at the refreshment stall was this monster.

Leaving aside the fact that it's not a Michelin-starred dinner or a romantic weekend in Venice, it's a big biscuit (and a broken one at that) - what on earth would you do with it if the answer was no?
Posted by Autolycus at 19:28 No comments:

The joy of ukelele

Every season of the Proms has its memorable concerts - and they're not all of the grand classical repertoire.

Topping the list of requests to BBC's i-Player replay service this week has been a late night concert by the Ukelele Orchestra of Great Britain. For 25 years, they have been exploring the humour in the sight of a line-up of people dressed like a rather formal 1920s concert party strumming (and singing) their way through a range of pop and rock classics, with some mix and match.
This must have been the first Prom to feature a Sex Pistols number, and a man who looks a bit like your bank manager performing Kate Bush's Wuthering Heights - with the audience shouting "Heathcliff!" at appropriate moments. One audience member stole a laugh by recalling (at some reference to rock) a folkie's famous rebuke to Bob Dylan for turning to an electric guitar 40 years ago, and shouting "Judas!".

But what caused the most stir was some more serious audience participation. Nigh on a thousand people brought their own ukeleles for a mass performance of Beethoven's Ode to Joy theme, with the UOGB providing harmonies and descants: and some audience members sang along (in German too). All very jolly, all the more remarkable that it was happening at nearly eleven on a sweltering night - and rather moving too. Joy indeed:

I've never been a fan of TV talent shows. Even if they're run in the kindest way possible (some hopes), there's a lot of ho-hum and why bother acts before you get to someone you would pay to see again.

I don't doubt the Ukraine's equivalent has its fair share of Whitney-wannabees, but they seem to let their cultural boundaries stretch that bit more. This is - well, judge for yourself:

This week, I've been both amused and amazed by the way the healthcare reform debate in the US seems to have branched out into absurd stories about the National Health Service.

This may be because the loonies don't need a dictionary to misunderstand the NHS, unlike other European systems that that provide universal care through insurance, at lower cost and higher efficiency and effectiveness.

Or it may suit the more machiavellian among them to face a furious blacklash from this side of the water, if it enables them to dismiss any reform proposals as being like the system defended by people with snooty accents, bad teeth and attitood (though, as it turns out, there are plenty of American expatriates willing to tell the truth).

As I understand it, there's little if anything in any of the proposals before Congress that approach the idea of a single payer, let alone a single delivery system, for healthcare in the US. I doubt if it would be possible in such a large, diverse and individualistic country. We tend to forget that the NHS is very much of its time, founded as it was at the high point of belief in community spirit and collective action through the state to achieve common ends. That, after all, was what was believed to have won the war. But the neocons' target audience wouldn't be aware that all this is not new: Churchill's first speech in the 1945 general election campaign claimed that a Labour government - people he'd worked in coalition with for the previous five years - would need a Gestapo to carry through policies like creating the NHS.

As the dust settles a little, what has really struck me is how so many of the comments from this side of the water see this as more than just a series of mistakes or political exaggerations: people are taking it as an insult both personal and national - our very sense of ourselves has been injured. It's as though the neocons have been taking pot-shots at Lassie and spitting at the Queen. In the long history of reciprocal misunderstanding, this feels like something of a watershed: perhaps de Gaulle had a point.
Posted by Autolycus at 16:25 No comments:

Ploughing seriously through the analysis of the Government's potential fiscal crisis, whither Iran? and the like in this month's Prospect, I am intrigued to learn that one of the more obscure cable TV channels that specialises in Things That Go Bump In The Night is apparently planning to bring us a programme from America about a short psychic.

It's called Small Medium At Large.

And she really exists.
Posted by Autolycus at 09:37 No comments:

We seem at last to have come to the end of the pre-holiday desk-clearing that makes July a bit of a nightmare at work - the rest of the department sneaking up to the metaphorical wall and hurling work over, and buggering off with a cackle and snicker (or so it seems).

But this week, it has been quiet enough to engage in conversation with my colleagues, this morning on the derivation of "Hi de hi!", which one of us has clearly decided is the cheery phrase du jour that we all love to hear of a morning.

As the oldest inhabitant, I managed to trump the lot of them by remembering Cab Calloway's "Minnie the Moocher":

Posted by Autolycus at 13:47 No comments:

If in doubt, move stuff about..

Not having anything interesting to write about, I've succumbed to the lure of re-arranging the furniture - and adding a couple of whirly widgets to the sidebar. I'm just a child at heart.

If your inner teenager is interested, here's where you can find the tag cloud and the Flickr widget. And no, I don't know if you can get one that'll add glitter.
Posted by Autolycus at 19:23 No comments: