It fell to earth, I know not where...

Cycling along Narrow Street, I saw something spinning in the air ahead of me, and several metres above the centre of the road. It's too early in the year and too large for a sycamore seed. As I got nearer, it resolved itself into a feather, but not some fluffy piece of down zigzagging its way gently to the ground.

By the size and colour, I'd say it was a wing feather from a cygnet or a goose: and it was spinning more or less about its vertical axis - something I've never seen before. No sign of a wounded bird in the area, no cartoon exploding goose, no child with a bow or a catapult - nothing to explain it that I could see.

It's the little mysteries that keep life interesting, don't you find?
Posted by Autolycus at 10:54 No comments:

All over Paris, you might spot mosaic plaques of space invaders. An oddity that didn't much arouse my curiosity, until on my last visit I happened across an expensively pretentious (and pretentiously expensive) art book all about the "invasion". The other day I saw evidence of an incursion in London, on a railway bridge in Southwark. Aha, I thought, I've spotted something new: I'm ahead of the trend, I'm no square, I'm alert, I'm awake, I'm aware, keeping abreast, out in front with the rest of elitesville*.

No such luck. It turns out I'm 10 years behind the times (no surprise there, then): guerrilla tiling is simply everywhere - positively vieux chapeau.

*No prizes for identifying the quote (but I might be asking questions later - or not).
Posted by Autolycus at 19:01 No comments:

The people who won games at our barbecue on Saturday are getting sustificates. I should have had another go at the cream crackers - I was only a couple of seconds short...
Posted by Autolycus at 18:04 No comments: Posted by Autolycus at 18:49 No comments: 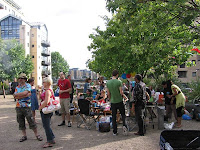 We're lucky, where I live, that the developers of our estate, unlike more recent johnny-come-latelies, didn't feel the need to cram accommodation into every available square inch of land. As a result, we have low-ish buildings grouped around a central square open to the river, which gives us a vaguely collegiate feel, and a space that lends itself to informal socialising, like our annual communal barbecue (there are plenty of individual groups on any fine day, so there's also an elephant's graveyard of abandoned equipment available to be liberated if you look in forgotten corners of the garages).

This year the sun shone, the bunting fluttered, there was not only food, and drink, but music, fun - and games. We started with Bash the Rat and Play Your Cards Right (I was pipped at the post in How Fast Can You Eat Three Cream Crackers - who says the British have a dysfunctional relationship with food?); there was limbo dancing in the twilight, and musical chairs in the dusk - and, as far as I know, no tears before bedtime. Some clearing up to do this morning, though.....
Posted by Autolycus at 10:32 No comments:

What kind of cheese are you?

Yes, not having done anything at all interesting over the weekend, I turn to one of those internet quiz things for inspiration. Sort of.

Apparently, I'm "a soft, crumbly white blue-streaked cheese... very cool and mellow.... very knowledgeable and wise and people come to you for advice and help."

Which is as might have been last time I looked at it: but the strange thing is, I really don't like blue cheese.

And now I've done the test again, I find I'm camembert: " a creamy, delicate tasting cheese. You are refined and graceful and very organized. As a very insightful cheese, you like to ponder the meaning of life."

Hmm. I wonder if they ever come up with anything uncomplimentary, as for example:

"You are Stinking Bishop - you smell of old socks and wet towels. An acquired taste, favoured by those who don't mind a dare."

"You are Mousetrap - old, hard, bitter and cracked. You are supposedly attractive to rodents if to no-one else, but are not surprised to find yourself remaining un-nibbled by even the most desperate mouse."
Posted by Autolycus at 18:25 No comments:

It was a dull grey morning, with nothing much to look forward to but some rain, when I heard hooting and sirens from the river, which usually means something at least worth a look. It turned out to be the start of the annual Barge Driving Race, in which teams manhandle (there's no other word for it) lighters from Greenwich to Westminster. Two oarsmen run up a slope to get the angle to heave the lighter forward, while another team of two wait to relieve them - this is a long race and these are both bulky and weighty craft ("lighter" only in the sense that their predecessors were used to make larger ships lighter by taking on their load for onward transport):

Feeling energised, I went to see some sheep on London Bridge. In times past, it was a valuable privilege of "Freemen of the City" to be able to drive livestock over London Bridge free of tolls: for the 800th anniversary of London Bridge this year, the Lord Mayor's charity appeal was combining a re-enacted walk of sheep across the bridge with an "Anniversary Fayre".

My heart had sunk a little at that. A "Fayre" suggests an event with the wrong sorts of pretensions, the "fête worse than death" where the home-made jam (sorry, preserves) comes with a mark-up for the lacy doily tops on the jars, and there is gimlet-eyed pricing on the bric-à-brac and vintage clothing ("This isn't a jumble sale, you know"). The weather was looking like a good excuse to ignore it.

But in the event (and I notice there seems to be some backtracking about the spelling), it turned out to be a collection of stalls and tents displaying mostly the crafts of some of the City's livery companies and various other heritage-related organisations - bricklayers and "tylers", stained-glass makers, painters, calligraphers, playing-card makers, assorted vintage vehicles and demonstrations of blacksmithing by the bus stop. Sundry people in robes of office and other sorts of fancy dress added some colour to the event. But the sheep were the main attraction: and groups of people were taking occasionally reluctant animals for a short walk before handing them on to the next group (I'm assuming they'd all made a suitable donation to the Lord Mayor's appeal).

And all the while, the bells of the City churches were ringing - because yesterday was also the 150th anniversary of Big Ben.
Posted by Autolycus at 09:48 No comments:

I have a cabinet full of assorted screws, nails, nuts and bolts and bits and pieces that I've saved in the course of DIY over the decades. Since I moved to a modern flat, it's hardly been looked at in its dark cupboard corner.

Recently, I noticed that the endless bumps and potholes must have shaken out the bolt holding in place one of my rear panier's supports. This hasn't had an immediate effect on my ability to get the weekend shopping home on the bike, but it can't be doing any good to have all the load carried on one side. So it was time to try to find a screw of the right thread, thickness and (crucially) length to fit the slot. And sure enough, after much delving and sorting, I found it: I have no idea what it was saved from, but it was a perfect fit.

Thirty years of hoarding to save a pound. My Dad would be proud of me.
Posted by Autolycus at 11:45 No comments:

On a free afternoon this week, it seemed only fitting to the weather to visit a bit of India in London, at the British Museum.

In the courtyard outside, the sun was beating down on a small collection from Kew of Indian plants - some familiar favourites like rhododendrons, some less so (at least I now know what a banyan or a peepul tree looks like). Inside, the Garden and Cosmos exhibition of court paintings from Jodhpur was in a blissfully air-conditioned room.

The display moved from lively paintings of seventeenth century court frolics, via late eighteenth century representations of the universal Ramayana story, to increasingly austere and formalised paintings from a time in the early nineteenth century when the maharaja was under the influence of a particularly abstract brand of yogic cosmology.

You could just lose yourself in the colours; but I couldn't help noticing that while in the earlier paintings the people, not to mention the birds and animals decorating the scene, are shown in many and varied activities, in the last, they are all arranged in strict and formal, even totalitarian, patterns. And at the very end, there's a room of paintings showing three holy men, in the same relationship but with two supported by different animals, on differently coloured "cosmic oceans" - so abstracted that no-one knows what they mean. No wonder the maharaja's nobles finally revolted.
Posted by Autolycus at 20:56 No comments: