Speaking of excuses for being late to work, I had the ultimate this morning: I had to give way to the Danish Navy. Or a bit of it, at any rate. 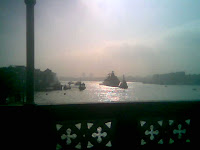 It's that time of year, when the courtesy visits start. Last week, a ship from the Irish Navy was in town (no doubt for St Patrick's Day) - moored up against HMS Belfast (ho, ho, ho) in the Pool of London, as some are; and there are often ships in (if not always in the Pool, then at Canary Wharf, just up the road from my home) from NATO countries like Denmark, Belgium and the Netherlands, and occasionally one will come from Brazil.

This morning, Tower Bridge was opened for a Danish ship. Rather prosaically, it was towed into position by some serious-size tugs (much as one might like to see a dashing destroyer sweep into position at full tilt, it would hardly be safe), with a suitably deafening blast from its siren as it passed into the Pool. Why, by the way, the impulse (seemingly universal) to wave to and from passing ships?

On the bridge, all the traffic formed a queue (you don't have much option when the way ahead through the bridge towers is interrupted by a vertical roadway), allowing the stream of two-wheel vehicles to squeeze to the front and (apparently stupidly) across the full width of the road. Unfortunately, as you can see, I only had my rather limited phone camera on me.

Eventually, the roadway began to descend (much hilarity as, for some reason, it stopped and went back up for a few seconds), and after what seemed like a very long time to resume the fully horizontal, bells and incomprehensible announcements heralded the opening of the ornate, faux-mediaeval gates. Here it became clear why so many cyclists and motor cyclists had taken up the right-hand lane: the gate on that side opens slightly earlier. For once the road was completely taken up with something like sixty two-wheelers leading the charge in both directions: but within fifty yards or so, only the patient queue on the south side, and the press of pent-up pedestrians, told you anything out of the ordinary had happened.
Posted by Autolycus at 13:36