Executions, fairies and a unicorn A cool stiff breeze said this was definitely a museum day. Clearly one has to be up very early to beat the queues for the Sainte Chapelle (it looked like about a hundred people before 10am), so I went next door to the Conciergerie, where I haven't been before. Part of the mediaeval royal palace and later the home for courts and their associated holding cells, its vaults and cramped courtyards became notorious as the last resting-place for many a victim of the revolutionary Terror, most notably Marie Antoinette.

That's what the display focusses on, with careful attention paid to balancing the interests of different political attitudes to the various personalities involved; and rather less careful attention to the slightly risible impression given by the shop-window dummies in the re-created cells and offices. I was rather taken by the decorated capitals on some of the columns. Strolling around the Ile de la Cité, which contains the remaining mediaeval buildings of government and their successors, you also pass the Flower and Bird Market. Fortunately, no caged birds were on sale today; the plant market seemed very quiet, with few takers, not even for the various decorative bits and bobs, including a whole shop-window of fairies to put at the bottom of your garden if you wished.

Around the corner is the Quai des Orfèvres, the Paris equivalent of Scotland Yard as a shorthand term for resourceful detectives hot in pursuit of wrongdoers. No echoes of Maigret today, though: it's all baseball caps and sweatshirts rather than trilbies and "traction avant". All I could see was a fearsomely athletic-looking officer who was walking back and forth apparently counting the police vans - they can't seriously expect anyone to have stolen one, surely?

Passing through place Dauphine, which must the the most crime-free address in Paris, I noticed a hotel entrance whose antiquated lopsidedness is no doubt worth a mark-up on the prices rather than the embarrassment it would have been when I first came to Paris, and a restaurateur's self-assured way of advertising closure for the holidays, before coming to the Square du Vert-Galant. This quiet little park is tucked into the tip of the island, from where you can see a panorama of successive bridges along the Seine. It was near here that the then French king's power struggle with the Knights Templar ended with the burning of the Master of the Order. Thank goodness D*n Br*wn didn't work it into That Book, or it would be so crowded that people would be toppling into the river. There were times, in the confines of the Conciergerie, that I started to feel it might not be a bad idea for some of the organised tour groups squeezing up and down the staircases: it can be hard to resist the thought that "I am a traveller; you are a visitor; they are **!?§*** tourists".

A little people-watching over lunch on the Boulevard St Michel (a home-grown fast-food place called Pomme de Pain - very reasonably-priced salads and sandwiches): at the traffic lights, two ladies who must have been German. There was a lull in the traffic, but for all that they looked of the fearlessly "alternative" generation (short hair, sensible shoes, one dangly earring, you get the picture), they stood and waited....and waited.... while everyone else sailed over regardless of the lights. On the rue de la Sorbonne, I saw a lorry - far too large for the narrow street - crash over one of the bikes at the Vélib station, ripping it completely from its docking point, so perhaps they were right to be cautious. 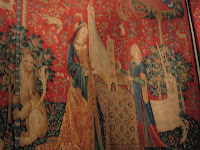 A passing cloud softened the light enough to make a photo of Montaigne's statue worth trying again, as I passed en route to the Musée de Cluny. I haven't been there since my first visit in the 1960s, and there is much more than the "Lady with the Unicorn" tapestries (though they alone are worth the price of entry). The rescued mediaeval stonework didn't seem any more exciting than it must have done to the stroppy teenager I was then; but the special exhibition on lustre ware had a few pieces to remind us what a rich history the Middle East has, and the regular collections have some pieces of great skill and vitality. There's a beautiful golden rose, and carved ivories (extraordinary detail in the representation of the flowing folds of the robes in this this 5th century Byzantine piece), carved altar-pieces and religious statuary galore (there's a Flemish Madonna reading to Jesus, where the infant seems to be delighted to have wrapped himself on her necklace: or is it a pointer to a rosary?). One thing I did notice: a bishop's tombstone showing his robes decorated with swastikas (I'd have thought that it either wasn't known or would have been seen as a heathen symbol), which rather puts you on the qui vive for the casual and matter-of-fact anti-semitism in, for example, a series of hangings on the martyrdom of St Stephen.
Posted by Autolycus at 17:33